2018 can be termed as the “year of change” in Pakistan. The election held in May 2018, are considered as best ever election in the history of Pakistan. Voter‘s turnover was also better. In these elections, no cases of rigging are observed. The management and security was much better than previous elections. Some political parties rejected the result. Recounting of votes in some polling stations has also been done on the request political leaders.

In this year, National political scenario has been changed to 180 degree. The political parties who have been dominant from last 20 year are defeated. In present elections, none among Pakistan Muslim League N (PMLN), Pakistan People’s Party (PPP) or Mutahida Quami Movement (MQM) won or got majority. People have voted mainly for Pakistan Tahreek e Insaf (PTI). The chairman of the party Imran Khan (IK) is now a popular leader and expected prime minister of Pakistan.  Ex-cricketer and aggressive politician, won on his slogan “Naya Pakistan”. His political statement comprises of the promise for change in the country. IK inspired masses. The results of 2018 elections have proved that Pakistani people are now fed up of political parties ruled previously. The politicians who used to win in specific areas from last 20 years lost in these elections. For the first time elections were held under the observation of international media. International observers have appreciated these elections.  Patrimonial politics have been eliminated for the first time after IK’s struggle of 22 years.

Writing more, this is critical phase for both Pakistan and PTI.  International image of Pakistan has already been spoiled. India is throwing garbage on Pakistan. Unfortunately, so called liberals, politicians have also blamed Pakistani security agencies for terrorism in neighboring states. On the other hand, Pakistan’s economic situation is not very good. The crisis of electricity shortfall and water shortage is severe. Violating Indus Water treaty, India built Baglahar Dam on river providing water to Pakistan.  The water shortage crisis has reached to higher levels. Pakistan is also facing internal threat of anarchy. Conflicts between institutions has made country’s environment more frustrating.

IK has inherited crisis including electricity, water, illiteracy, poverty, war on terror etc. His first press conference after winning elections has been appreciated internationally. His victory speech has been broadcasted live in many countries. In his statement he said that he will eradicate corruption, bring reforms. He also said that he will not take protocol and his ministers will follow him. He said he will not use Prime Minister House instead he will use his “Banni Gala house”. People have expectations from IK. He has been selected for expected Prime Minister. Other Political parties have joined hands to made opposition.

Discussing more! Now a day’s major political party PMLN parliamentarians are blaming army for interference in politics. Some journalists also think that there are chances of clash between Army and IK. There is a mongering in national and international media of perceived relationship between IK and Pakistan army. This idea is based on speculation created by Indian media and some media houses of Pakistan.   This forecast of clash between IK and Pak Army is a part of typical cynical approach by the media where they create myths as a part of propaganda.  IK has not taken over as prime minister and a conspiracy has taken birth to strain relations between Pak Army and incoming government. This is also a change for IK.  He has to be more careful and keen about his statements.

Concluding more, IK has an identity as a legend in past. He came into power as a hope for public. This victory is actually responsibility for IK.  IK has to perform and try to full fill his promises to maximum level. H People have higher expectations from IK. They are looking forward to the solutions of their problems. Now, actions are much more important than words. The coming years will define future of IK and PTI. 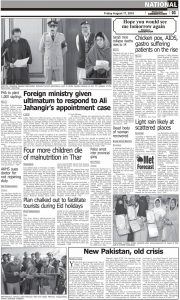