Moharram is the first month of Hijri calendar. In this month the huge tragedy of “Karbala” and “Shahadat e Imam Hussain” was happened. Muslims all over the world respect this month and observe special prayers. On 10th of Moharram congregations are observed across the globe. In Pakistan, the Shia Sect start observing congregations from 8th of Moharam and the rituals end till night of 10th Moharam.

After 2008 and start the war on terror, brought suicidal and bomb attack in the country.  The terrorists used to attack on Moharram congregations, Masajid, Imam bargahs and shrines. The continuous killings of Shia and Sunni scholars are the evidence to the intrigues of terrorists and hostile elements. These elements wanted sectarian riots and killing of public.


Writing more! By the grace of Allah, in our country there is no such environment created. Pakistani religious scholars always show hospitality for other sects. Pakistani scholars always try to create harmony amongst all sects. Hundreds of religious scholars have signed a Fatwa last year which is written to promote peace and religious harmony across the country. The Fatwa named “Paigham E Pakistan” is not merely a document. It shows sentiments and intentional efforts of Pakistani scholars towards peace. The fatwa outlawed hate speech, discrimination among different sects.

Concluding more! Hostile anti-state elements and terrorists may take advantage of Moharram congregations. As there will be larger gathering of public and scholars, they can conduct terrorist attacks. It is now responsibility of both religious scholars and public to work for peace promotion. Specially, Ulema (scholars) should avoid sectarian discussions. They should avoid hate speeches and promote hospitality among sects. When people of all sects have religious harmony there would remain no room for hostile elements. The plans of such elements will automatically deteriorate. On the other hand, if some terrorists attack is conducted, it should not be taken as sectarian killing. 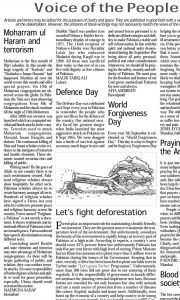