Lies are destructive and insidious

Why people lie and which benefits they get are mentioned below

Liars know that repetition of a lie is important. When lies are repeated over long periods of time, they tend to gain broad support from the people who trust them. Only a few people devote the time and effort to research to fact-check. Liars usually make slight modifications each and every time when a lie is spoken. People do not bother to check the newly made changes in the previous lies. They play with the psychology of the people.

Like Destructive fires lies spread quickly and easily. People share news and statements without knowing the accuracy of the words. 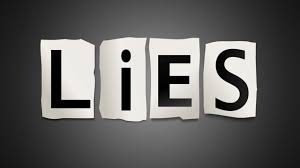 The question raises here why people lie, because

The techniques which liars use are following

Furthermore! When a leader or a public figure lies, it is spread faster than the lie of a common person. People tend to believe in lies even after they are proved wrong. Basically, this happens when the lie conforms to the believer’s wants, opinions, and emotional needs.

Usually, people are biased in different dimensions like socially, politically, religiously, etc. Lies are used to strengthening biasness. It has common practice now a day to spread misinformation. People do affect the thinking of people in their surroundings.


“A truth is not hard to kill, while a lie well told is immortal” Mark Twain.

“That which comes from the mouth can only be what the mouth is full of” Plato once said.

Now it’s our job to determine what the speaker’s mouth is full of. Either it is full of facts and the truth or it is manipulating or misleading.

I am not upset that you lied to me, I am upset that from now I cannot believe you” Friedrich Nietzsche.

When facts are found it is hard to believe the person

Writing more! Dishonest Political leaders and sociopaths use the lie as a tool to get the benefit and their self-interest. Their prime motive is only their own benefit. Public rely on national leaders, information experts, social media sites, and news organizations about facts and information. Misinformation is mainly spread through social media sites. Critical facts are hidden whereas to create public opinions lies are used massively on media. As a result, people start believing in specific people. They prohibit opposing information, ignore reality completely, and continue to believe. When it is found that a leader has lied over and over again, that person does not deserve support, trust, or respect. Only fools would continue to rely on them.

Concluding more! The lie is prohibited in every religion because it has a negative impact on the society . The lie is a dangerous reality that can create unrest in society. It is a killer of relationships. On the broader spectrum, lies create massive wrong decision making.

Follow us
2020-11-19
admin786
Previous: Keep Your Job when You Have Been Out For Quite a Long Time: Step by step instructions
Next: STUDY IN SYDNEY AUSTRALIA