Even Freedom has limits

Media comprises of many forms in which electronic, social and print media are important. Media plays a vital role like creating general opinion, educating common public and raising level of awareness etc. General public usually create their opinion on the basis of reviews presented in talk shows. Columns and news printed in News Papers also play key role in making public opinion. In other words media can be considered as public mind maker, which can influence masses. The strength of media can be observed in United States elections. Now, social media is also playing its role in highlighting and resolving social issues or promoting political parties.

Along with other benefits, media brought bundle of disadvantages. The major disadvantages are disseminating, disinformation and advocate specific propaganda. It can be done on behalf of adversaries.

In fact, media is the forth pillar of any state. Countries at large use media to influence internationally. On the other hand, political parties use media especially electronic media and social media for campaigns.

Discussing more, Pakistan’s electronic media consisted of Pakistan Television (PTV) since 1964. In 1988, first semi-government channel was launched. Later on, private channels were provided licenses to broadcast in 2002. Nowadays, approximately 60 channels are working in Pakistan. An autonomous body named Pakistan Electronic Media Regulatory Authority (PEMRA) was established in 2002. This institute was made to regulate, or improve quality of programs which are broadcasted. It can issue code of conducts to private channels. With the increase in number of private channels, competition has also increased. To gain public rating, channels have started to broadcast different type of programs.

Writing more, in later years, PEMRA policies were lighten to flourish free media in the country. This freedom of speech has given some channels, a way to talk against the country. They started to highlight only negative or pessimistic view of country. Some media houses fell pray in the hands of enemy. Their news or reviews (printed or broadcast by these media houses) are coined by enemies. This type of reviews is quoted as a proof against Pakistan on international level. The major target of these negative themes is Armed forces of Pakistan; Inter services Intelligence (ISI), lately Judiciary and patriotic parties.

Along with media houses, some political forces are also following the same narrative. It is common secret that India is always involved in nurturing, trapping individual journalists as well as media houses of Pakistan as part of their non-kinetic war against us. These media houses have started harping to tune of Indian secret agency and fulfilling their agenda indirectly. This is most dangerous face of media.

Furthermore, on the name of freedom of speech, media wants freedom to even talk against National institutions. In this era, war is not fought on ground. The war is now fought non-kinetic, hybrid and psychological. The countries gain control over the others by trapping the common public psychologically. No army can win any war against enemy without support of common public. If common public start hating their security agencies then won war is loosen.  Today, media is used as a war weapon against any nation. Most of the wars including political war are won on the basis of strong media campaigns. One can observe stance of Indian media on every narrative. India always uses its media against Pakistan and gets benefits on international level. On the contrary, the channels which are sold in the hands on India, tune to India’s narrative. The result of this can be observed on International front. India used to defame ISI and Pakistan army by blaming it for support terrorism in India. India has no proof for this blame but by using media India gained numerous benefits. Shamefully, some Pakistani journalists, political leaders and media houses are also doing the same. Even one statement can changed the whole narrative of the world.

Concluding more, media can play its role to strengthen any country. On the other hand media can also create pessimism and play against state. So called liberals who are flag bearers of unbridled freedom of expression want to allow media groups to distort the popular thinking of Pakistani people. No media group should be permitted to defame any institution of Pakistan, nourish the agenda of enemies, cultivate enemy’s narrative within the country and disturb moral fiber of its people. It is ethical responsibility of each and every media group to remain patriot and do not promote narrative of the enemy. Otherwise, government should ban those media houses.
tweet 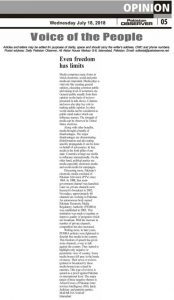